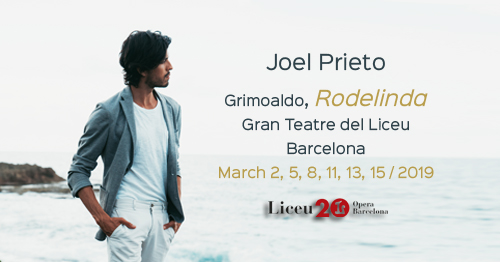 The tenor will take the role of Grimoaldo in this Händel opera, in its first performance at the Barcelona opera house

The Madrid-born Puerto-Rican tenor, Joel Prieto, is returning to the Gran Teatre del Liceu, this time to take the role of Grimoaldo in the Händel opera Rodelinda, which will be making its premiere at the Barcelona opera house.  The production, directed by Claus Guth, was programmed in Madrid at the Teatro Real in the 2016/17 season and is co-produced also by Frankfurt Opera and the Lyon Opera National.

For Joel Prieto, this Händel opera means his debut in baroque music, “a style which has always attracted me, and which I have longed to get involved in for some time.  I love the elegant line of the singing, and getting to grips with a new style of ornamentation is a wonderful challenge for my voice. Over the last few years Mozart has been at the center of my repertoire, and from there I have been exploring many other composers, from Donizetti to Verdi or Berlioz, with some incursions into repertoire by Wagner, Leoncavallo, Richard Strauss and Kurt Weill, as well as composers who were Mozart´s contemporaries, such as Martín y Soler, and not to forget the occasional zarzuela. This is why I am excited by this new adventure,” the tenor explains.

In the Liceu, Prieto, who won the Operalia Competition in 2008, will be performing alongside the soprano Lisette Oropesa and the countertenor Bejun Mehta (performances: 2nd, 5th, 8th, 11th, 13th and 15th March 2019).

After his recent debut as Ernesto in Don Pasquale at the Théâtre de La Monnaie in Brussels, and his performances in Barcelona, upcoming engagements will take the tenor to the Teatro Real in Madrid for Falstaff (as Fenton), a debut at the Campoamor theatre in Oviedo with Luisa Fernanda (as Javier) and his return to the Salzburg Festival, this time as Orpheus in Offenbach´s Orphée aux enfers.